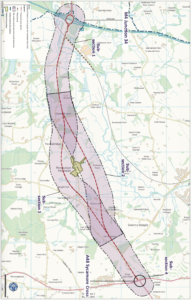 The Vale of Glamorgan Council, on behalf of Welsh Government are currently consulting on a proposal for a new road or road- widening scheme, from the A48 at Sycamore Cross (west of St Nicholas), to J34 of the M4 (nr Llantrisant) . The route runs through the beautiful valley of the River Ely, close to or through Pendoylan.

The Vale Council have already built a new road (5 mile Lane) from Barry to the A48 at Sycamore Cross, which blocked a lane used by many cyclists, from Dyffryn to Llancarfan.

The proposal is to extend this link north from the A48 to Junction 34 of the M4. The justification is to provide better road access to Cardiff Airport and the Enterprise Zone at St Athan ( where the Aston Martin factory is located).

The consultation is running until 23rd December.

Both new road options, A & B, will close the two lanes running west from Cardiff north of the A48, which are very much used by cyclists going into the Vale. Option C1 & C2 will keep these lanes open.

The lanes at risk of closure are:

It is understood the lanes will be closed because the new road will have insufficient height for an underpass or bridge beneath it. 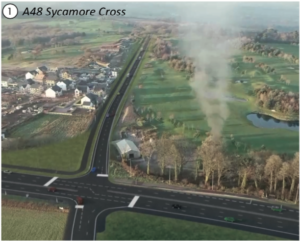 Whilst potentially closing these important cycling routes, the proposal is said to improve Active Travel routes. It is true that 3 of the options will provide cycle routes going North-South alongside the new road (as have been provided on Five Mile Lane) which will improve the situation in those directions. But very few cyclists travel north-south, whereas the roads that will be blocked are major east-west cycling arteries.

Data from Strava shows that these lanes are amongst the most well-used cycling routes in Wales. Closure of these 2 lanes would mean cyclists travelling west from Cardiff would be limited to using the lane from Dyffryn to Llancarfan, via Moulton , or the A48 (Cowbridge Rd), or the A4119 (Llantrisant Rd) both of which are extremely busy roads.

So this proposal is really important to the many cyclists both in Cardiff, and to its West), who use these routes to cycle to and from the Vale of Glamorgan.

Arguments against the new road:

Do please respond to this consultation, whether you feel the road shouldn’t be built at all, or at the very least because the two main options will close lanes well used by local residents and by very many cyclists.

You could choose to support Option C1, that of widening the existing lane from the A48 to J34, because it keeps the existing East/ West lanes open, and it provides a North /South walking/cycling route alongside it.

However, it is probably less likely to be chosen as it is almost as costly as option A, does not provide bypasses to the villages of Pendoylan and Clawd-Coch, and will only be to a 30mph standard, (whereas Options Aand B are designed for 60mph). As with all the options, it would still cause major damage to SINCs, marshy grassland, mature hedgerows, ancient woodland and protected species.

You can object by sending an email setting out the details of your objection to:

Or you can use this app produced by the main campaign group opposing the road, Vale Communities for Future Generations:

Or you can complete the official Consultation form