There is change in the air. This Saturday we spent the morning in the company of Julie Morgan AM, along with the great and the good of cycling in Cardiff.

It was a chance to sell cycling not just to those bike-curious enough to brave the weather, but also to ourselves.

Breaking down the silos…

With everyone’s focus on the Active Travel Act, Welsh Government snuck in the Well-being of Future Generations Act. I’ve talked about both pieces of legislation over on Cardiff By Bike in some detail already, but the latter is probably the most important one. Let me explain.

If you pardon the tool analogy for a moment, if the Active Travel Act is the nail the Well-being of Future Generations Act is the hammer. It aims to ensure the public sector and other corporate bodies plan in a way that improves the lives of the people of Wales and doesn’t store up problems for future generations to deal with. Active travel is the most complete solution to improving the well-being of practically everyone, so you would hope that local authorities would be investing in active travel whether there was an Act or not.

Julie opened today’s proceedings with a fundamental point. Cycling addresses most, if not all of the Act’s well-being goals.

There are seven well-being goals:

Cycling is part of a vibrant economy and a healthy, resilient workforce. It is also one of the most affordable ways to get around and provides mobility to those who find walking difficult. Julie said it was five of the seven, but I’d argue for a globally responsible Wales as well.

Of course, to encourage people out their cars we need a few things from the council. Caro Wild spoke next about the plans they have for the next few years; including the primary routes and the launch of the Nextbike hire scheme, which looks to start appearing on our streets before May. He also spoke of the partnership with HSBC and British Cycling to bring cycling to schools. 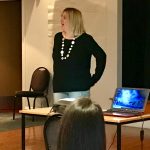 Caro was followed by Cathy Owen from Media Wales. When WalesOnline wrote an article about the fastest way to commute into Cardiff, it was Cathy who rode the bicycle…and won. Cathy spoke about her commute along the Taff Trail, as well as some of the challenges and benefits of riding to work, particularly with family commitments. There is a perception that cycling is the more time-consuming option when you have to get the youngsters to school, yet the opposite is true when you’re not stuck in traffic during the morning and evening rush. 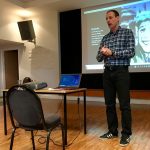 We were then joined by Anna McMorrin MP, the MP for Cardiff North. Anna only spoke briefly, mostly to reinforce some of the points already made.

Next up we had Simon Nurse, who you’ll no doubt know from his excellent Cyclestuff blog. He spoke primarily about the school run. We’re all familiar with how much more pleasant the roads are when the children are off school. Simon was keep to point out that pollution inside the car is much worse that it is on the outside (it is quickly diluted in the open air, but it hangs heavy inside) and that cycling with your children can be quality time with them that you may otherwise miss. 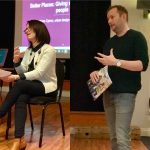 We then had a double-act in the form of Lindsey Brown and Steve Brooks from Sustrans Cymru. The focus of their talk was to look at the way streets are designed. We were asked to look at a few examples of urban design and to look for both the good and the bad. For most of the examples it was surprisingly difficult to see the positives. Then again, for so many years we’ve been building the urban environment to accommodate cars, often at the expense of people. 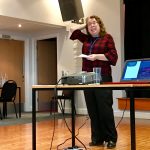 The penultimate talk was by Anne Phillips from Public Health Wales. I started this article talking about the Well-being of Future Generations and the increasing interest in cycling from a public health perspective is a testament to that.

Up until this point each talk had been centred around everyday cycling and cycling for everyone. It is finally being seen as the answer to everything, particularly the ticking public health time bomb. Of course, aside from being the solution to all that ails us, it’s also great fun. This leads us neatly onto the final talk of the day from Welsh Cycling, talking about the guided rides programme and Breeze rides they have available on letsride.co.uk. 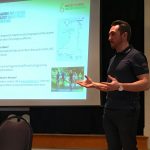 To close the day off, everyone was invited to take to their bikes for a short guided ride around the park.

Of course, it wasn’t all talks. The upper floor of Whitchurch Rugby Club was filled with stands from:

It’s easy to absorb yourself in social media, but it’s not until you see people face to face that you can feel the energy that seems to be driving cycling forward in Cardiff these days.

If Stevenage has shown us anything it is that you can have all the infrastructure in the world, but without a cycling community and the drive to change the people as well, you’ll be left with a lot of very nice but very empty cycle lanes.

The “people” side of things is slowly coming together, it’s the infrastructure we need to work on now. Having had a lengthy chat with a council officer at the event, the will is most certainly there, but they are human beings and are more than open to new ideas and to be corrected when they don’t get the plans right first time.