Cycle on the Senedd was established to put pressure on Welsh Government to make a success of the Active Travel Act. The main aim was to achieve an increase in investment in walking and cycling to £20 per head. This is the figure recommended by the Economy, Infrastructure and Skills Committee in their May 2018 report on the implementation of the Act and is also the level of investment enjoyed in Scotland. Wales is currently planning to spend just £10 per head over the next three years and over the past four years has spent considerably less.

Despite the National Assembly passing the Active Travel Act in 2013, Wales has seen little improvement in the numbers of people walking and cycling, with some indicators showing a decline. Given that Wales faces major problems with air quality, traffic congestion, health conditions such as obesity and type two diabetes, greenhouse gas emissions – all problems that active travel can help solve – we owe it to future generations to make a success of the Act.

Because active travel has such far ranging benefits for society, the campaign has the support of a wide range of organisations: 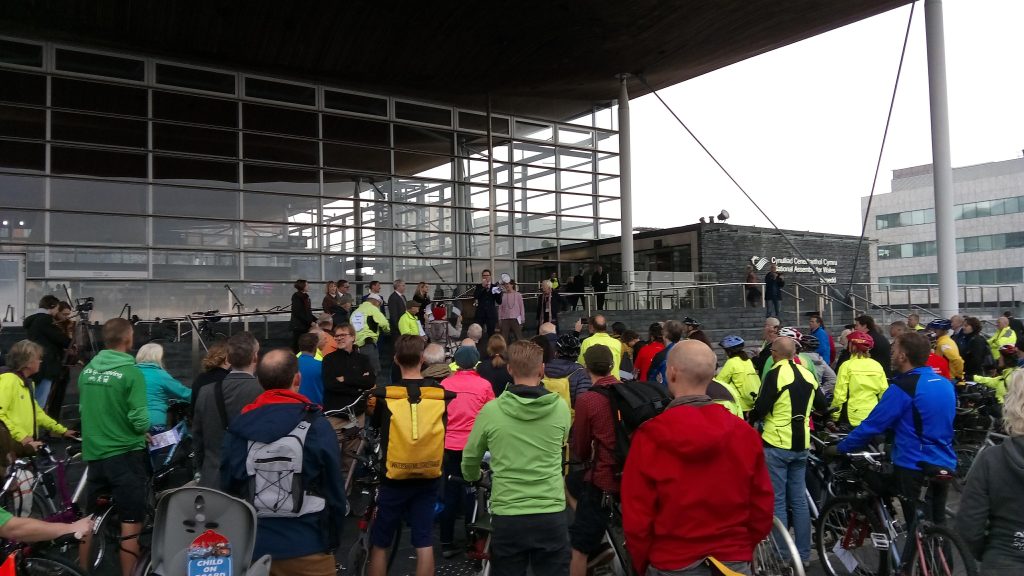 The lobby of the Assembly took place on October 2nd.

The event was a great success with around 200 people gathering on the steps of the Senedd and twelve Assembly Members from a variety of parties expressing their support for our aims.

As a direct result of the event, we had a useful meeting with Ken Skates, the Cabinet Secretary for Economy and Transport. He was very receptive to our calls for an increase in investment and a better plan for spending it. However he made no definite promises of action.

What can you do?

To maintain the momentum that has been created, we have teamed up with Cycling UK to organise a follow up email campaign. They are providing us with a web tool which will allow supporters to have an email sent to their AMs, constituency and regional, asking them to put pressure on Ken Skates. If you haven’t already done so, you can support the campaign here: cyclinguk.org/cycleonthesenedd

We would also be grateful for anything you can do to promote the campaign on social media using the Cycling UK link above, and the hashtag #CycleontheSenedd.

If you would like to get further involved in campaigning for better cycle facilities in your area, there are a number of local cycle campaign groups across Wales. Their contact details are below. If there isn’t one in your area and you would be interested in trying to set one up, get in touch with one of the groups near you and we’ll try to give you help and advice on how to get started.

Thanks for your support.