Last year’s Cycle on the Senedd was a great success with over 200 people gathering on the steps of the Senedd to campaign for more investment in active travel.  The event proved to be a very effective way of highlighting how active travel can make a major contribution to the achievement of Wales’ national goals and a very impactful way to lobby AMs and Ministers. 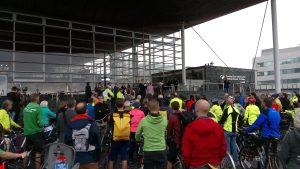 However, we still have a long way to go.  We called for £20 per head per annum to be invested in active travel.  We are now at just over £10 per head, which is some progress but only half way to where we need to be.

We also called for an ambitious, evidence based active travel strategy.  We have a commitment from the Deputy Minister that this will be put in place, but no details yet.

We believe that the declaration of a climate emergency must mean a significant shift of resources away from the private motor car and into more sustainable transport.  Meeting our demands should therefore also meet Welsh Government’s objectives.

For all these reasons we will be holding another Cycle on the Senedd this year. 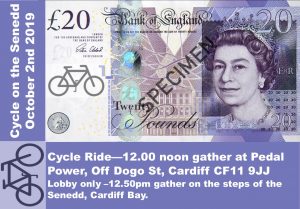 This year’s event will take place on Wednesday October 2nd, and, as an improvement on last year, will include a bike ride!  We will be cycling from Pedal Power in Pontcanna down the Taff Trail for the lobby on the steps of the Senedd at 1.00pm. The exact start time will be announced shortly.

The event has the full support of the  Assembly Cross Party Group on the Active Travel Act and we will be aiming to have as many AMs as possible on the ride or meeting us at the Senedd.  We are very grateful to Cycling UK for agreeing to provide insurance for the ride.

Our aims will be the same as they were last year, though we hope the climate emergency will add an increased sense of urgency to our lobby.

For the event to be a success all we need is you to join us on the ride, or at least on the steps of the Senedd.  Click here for details of how to sign up.

We look forward to seeing you there!