The police have a big impact on cycling. We all want to feel safer when cycling on the roads and be able to park our bike knowing that it will still be there when we get back.

Last year, Cardiff Cycle City held a very successful meeting with the new Chief Constable of South Wales who pledged his support for a range of measures to help improve cycling in Cardiff. So we invited South Wales Police to come back and update us on the progress they are making. 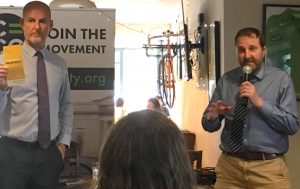 Steve and Mike from Crime Prevention opened the session with a pile of broken and damaged locks. They had some recommendations for keeping your bikes secure at home and whilst out:

Reminders to:  set Strava and other cycle computers to not record within 50 metres of where you live or store your bike.

Think about where you park and lock your cycle – look for places where lots of people are passing by, make it more difficult for people to take your bike and they will move on to someone elses.

Be Aware;  your bike can be ‘spotted’ as desirable.

And, there are NO figures available (via immobilise or elsewhere) on who gets reunited with their stolen bicycle ! 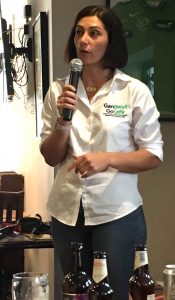 Teresa Ciano talked about Operation SNAP and the Close Pass initiative, plus she gave us all a nice free pen.

She started with some facts:

Why don’t GoSafe reply to people who have submitted reports? It can be disheartening to go through the process of uploading video without any knowledge of whether the offender has been dealt with.

How would GoSAfe define a Close Pass?

West Midlands Police make a LOT of noise about Operation Close Pass through social and other media and this heightens the notion that car drivers behaviours are being monitored/watched and possibly recorded with potential consequences for drivers.  Why isn’t Close Pass being given this priority/profile in Wales?

Can there be better communication between the Police and the Local Authorities?  E.g. there are FOUR different types of road markings outside Severn Road Primary School. The police looked at what could be done, but 18 months later there is still confusion.  The School has bought some of the Little People Signs, which some motorist has run over! There have been incidences of fatalities on Cowbridge Road and this area/school is particularly vulnerable.

Its understandable being asked to video our travelling by bike, but having to go through footage and relive horrible moments is unnerving. Concentrating on the bad things makes people less confident about cycling on roads.

Mobile phone use by motorised vehicle users is terrible

The Judicial system has a different set of values in relation to motoring versus other offences. 10,000 drivers on the roads have more than 12 points on their licence – the judicial system therefore says having a car to get around is more important than people’s lives.

Do you have any comments on these discussions? You can share them with us by using the form below.

One thought on “Cycling update, with South Wales Police and GoSafe Wales”