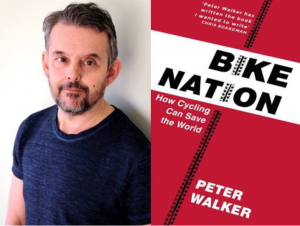 Last week we hosted an event with special guest speaker Peter Walker, the author of “Bike Nation: How Cycling Can Save the World”. He is also a Guardian political correspondent and regular contributor to their Bike Blog.

Peter outlined the essential message of his book, which is that the simple act of using a bicycle to replace short everyday journeys can have multiple benefits to both individual and society. There are, however, major barriers that prevent this simple message being heard, let alone acted upon.

The event was also an opportunity to draw on his knowledge of cycle campaigning across the globe and discuss what will work best for us in Cardiff and Wales. We also discussed which pro bike arguments are the most effective and how to communicate them.

“Peter Walker has written the book I wanted to write. It should be compulsory reading for anyone in a decision making role. This might seem a sweeping statement but when you see the diverse and positive impact more cycling could have on our lives – cyclist or not – you’ll understand.” (Chris Boardman)

How can cycling save the world?

Peter’s talk took a similar structure as his book; he started off explaining how he personally discovered the benefits cycling during a period as a cycle courier in his youth, riding a heavy mountain bike around the streets of London. He then went on to explain the health benefits attached to cycling, but how this is rarely capitalised upon due to the very real fear of having to share space with motor traffic.

A significant observation was that cycling is inherently a social justice issue. In countries that prioritise and invest in cycling, access to quality transportation is completely independent of race, class or income, as everyone can ride a bike.

In the UK, however, decades of motor-centric planning has given people little choice but to own a car, often inducing crippling debt. Investment in road infrastructure has discriminated against and isolated large sections of society, predominantly those from poorer backgrounds, and prevented them from using any transport alternative such as cycling or walking:

in thousands of cities transport is mainly built around cars, and thus explicitly for the benefit of the richer-than-average minority who disproportionally own them. More than this, the external social costs of driving tend to fall predominantly on the less prosperous, who are more likely to live next to a main road, enduring noise and smog, with their community bisected by busy traffic

As well as talking about pollution and safety, he also touched on the future: reshaping towns and cities and the challenges involved, and shared with us five things he learned when writing the book:

The talk lasted around forty minutes, after which the floor was opened up for questions. This quickly became more of a general discussion as everyone was keen to offer their opinion on aspects of cycling. Peter was open and frank about the challenges ahead, but also optimistic that society will ultimately have to accept the inevitable and embrace cycling as part of a more active lifestyle.

The evening was concluded when Peter was provided with a spare bike and accompanied to the train station to return to London.