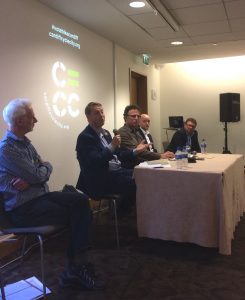 All four political parties who attended the special hustings arranged by Cardiff Cycle City agreed that Cardiff needs more people choosing to cycle rather than drive, but local cyclists want to see much more practical action from the politicians.

Conservative, Green, Lib Dem and Labour parties all sent representatives to set out their stall for the city council elections to a packed room at the Millennium Centre on Tuesday, 4th April, where approximately sixty people turned up to quiz them on how they will improve cycling in the city.

All the parties praised cycling for its health, and environmental benefits and all talked about doing do more make Cardiff one of the top UK cities for cycling.

In a powerful and passionate debate the cyclists in the audience demanded action on making Cardiff safer for cycling by providing and maintaining better and more cycle lanes and taking action to reduce vehicle speeds and combat inconsiderate parking.

Concern was expressed that the current lack of safe routes was a major barrier to allowing more women to cycle and generally making the bike a normal everyday means of getting about, as it is in the most liveable cities on the continent.

There were calls for much more to be done to enable children to cycle to school and acquire at an early age the habit of regular physical exercise.

Many people who work in Cardiff but live outside want to travel in by train and then cycle to work from the station but there was serious concern at the lack of provision for cycles on trains and secure parking at stations.  The lack of secure cycle parking in the city centre was also something the audience want to see addressed.

There was general consensus that air quality was a growing problem for the city and that increasing cycling was a key part of the solution.

By utilising social media the wider cycling community was able to be involved in discussions which were happening during the event and continued long after, being particularly centred around the twitter hashtag #VoteBikeCardiff

@CdffCycleCity When if ever are @cardiffcouncil going to enforce the 20mph limits in the city? Many drivers pay no heed #votebikecardiff

Got here and glad to see a packed room. Some good questions so far. Normalising cycling is definitely the way to go! #votebikecardiff

The main message from the event is that cycling is now a key issue for politics in Cardiff and the city’s cyclists will be using their votes to get a better deal, not just for themselves but because it will make Cardiff a better place to live.

Were you at the event? Let us know what you thought by commenting below, or completing our short survey here: https://www.surveymonkey.co.uk/r/N9CN2P5

One thought on “Cardiff Cycle Hustings: a summary”